Must be over 18 to purchase. Tidal Lines begins as our delicious classic gin recipe and is then infused with native Illawarra Plums over a ~12 month time frame in ex french oak wine casks. The gin and Illawarra Plum fruit are both placed directly into the casks and left to marry into this one of a kind spirit.

What is the Illawarra Plum? Illawarra Plums are not actually a plum at all, but an extremely rare Australian native bush tucker fruit which is packed full of antioxidants and not commercially farmed.

In the UK, distillers make a product called "sloe gin," which starts off as regular gin but is then steeped in sloe berries, a small black/blue fruit. A sloe berry looks a little similar to an Illawarra Plum, though it does not have an external seed and is a completely different species. The taste is also very different. Tidal Lines is an Australian native version of the UK's sloe gin, with Illawarra Plums used in place of the sloe berries. Australia also has other types of native "plum" such as Davidson Plum and Kakadu Plum, which are different to the Illawarra Plum. 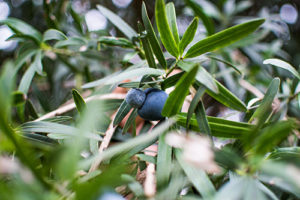 Presented in Headlands' signature gin bottle design, Tidal Lines is so smooth it can easily be sipped neat on ice, made into a sloe gin fizz, a gin and tonic, or substituted for any other sloe gin cocktail.

1 egg white or some aquafaba (optional but recommended)

This item is only available in Australia.

*Estimated shipping times may be affected by Covid-19.

Thanks for your review. Our team will be processing it and it might take a few days.

Thanks for the review. We are processing your review, this may take several days.

This product has been added to your cart